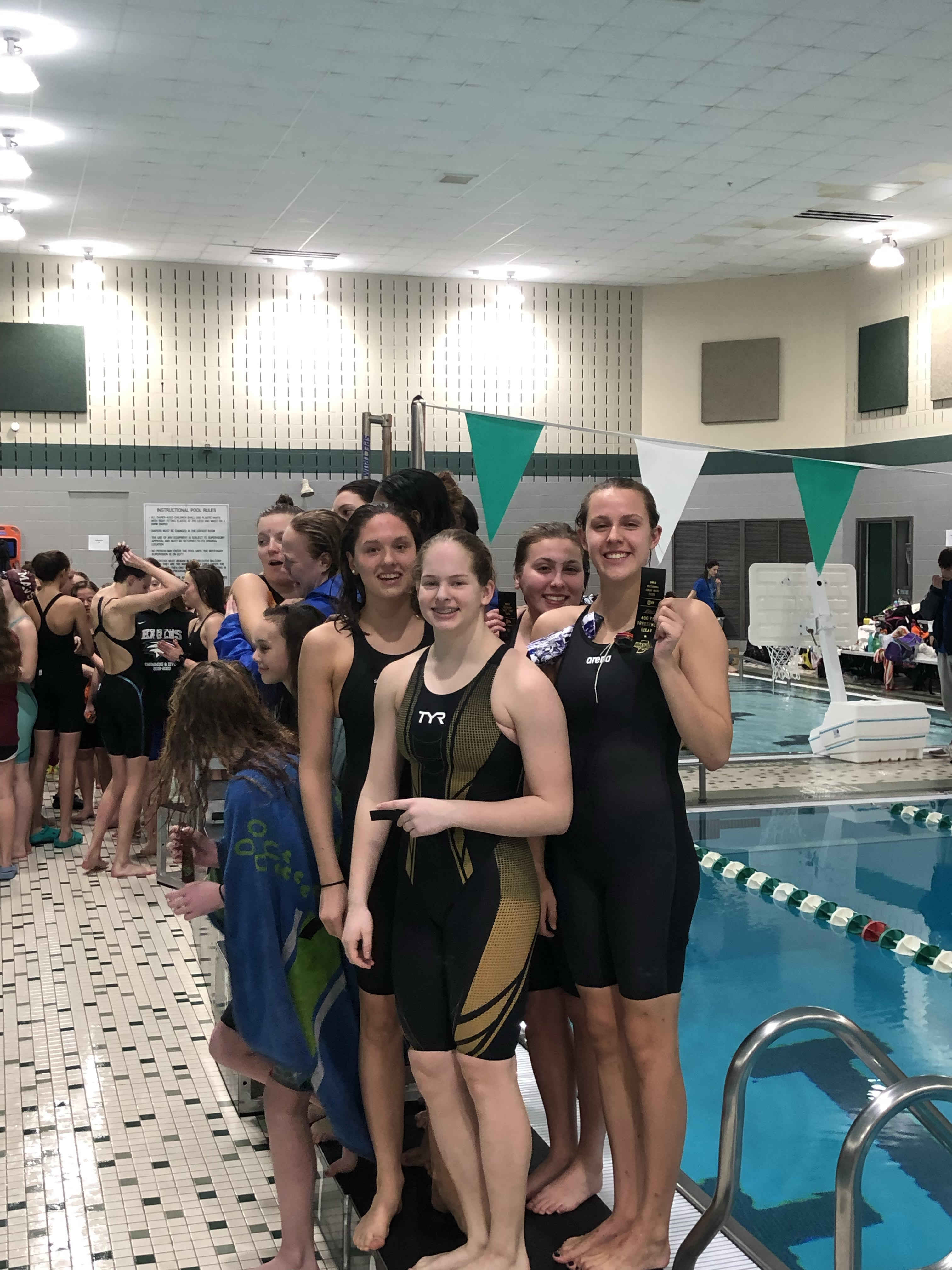 The Trailblazers had their final meet on Saturday and accomplished a lot at it!

We kicked off the meet with best 50 breast (36.64) and 50 fly (32.27) relay splits from Caitlin Clark and Audrey Priest respectively. With strong swims from Charlotte Kumler and Madison Clary as well, the girls went faster than they did on Thursday and held on to their 9th place seed time.

Charlotte Kumler then fought a hard race and turn-around in the 200 free. With a soft touch, the timers came up with a slower time than the coaches think she went, but she held on to her 14th place seed.

We started making moves in the 200 IM: Kylar Kavanaugh went very close to her Thursday swim but moved up a place to 12th while Regan Hooker went two seconds faster than Thursday and moved up two spots to 13th!

In the 100 fly, everyone moved up as well, but finishing first was Audrey Priest who set the school record with a time of 1:12.69, which also dropped her two places down to 10th. On the other side of the pool, Kylar Kavanaugh dropped another second to improve three places– coming in 12th with a time of 1:14:37. Regan Hooker was right behind with a time that was right on her Thursday swim time but was good enough to move her up one place for 13th and 1:15.63.

Our 200 free relays rocked it, starting with a best flat start 50 from Kylar Kavanaugh (29.52). Madison Clary and Zoe Napier followed with their best ever 50 relay splits of 28.47 and 30.26 respectively. Regan Hooker brought it home, and the girls broke the school record they set on Thursday by two seconds with a finish time of 1:57.95 and held on to their 9th place seed. Over the course of this meet, the girls dropped the record in this event by 5 seconds.

By a total chance of luck, Caitlin Clark was scratched into the 100 breast and, even better, got put in a center lane. She swam a hard race, dropping 2 seconds and 5 places to go 1:21.89 and come in 12th.

We finished off with a best flat start 100 free time from Kylar Kavanaugh (1:04.60) and best relay splits from Madison Clary (1;05.71) and Charlotte Kumler (1:00.06, which is also a new school record split). Combined with Regan Hooker, the girls broke their own school record set on Thursday by half a second, going 1:15.99. As our only A-final swim, they got on the 8th place portion of the podium.

As a whole, we came in 10th place (same as last year) but with 15 more points than we earned last year! We also had 3 additional swims at finals this year– that makes all the difference!

Some additional notes/stats on our seniors:

Regan Hooker will graduate as our all-time leading scorer in points (186) and individual points (36).
Not far behind, Caitlin Clark is currently 3rd in overall point ranking, Kylar Kavanaugh is 4th, Macy Paton is 5th, and Ella Eskenazi is 6th.
The class of 2020 has earned more points for UHS in swimming than any other class as of this moment. In fact, 62% of the sectional points of the last four years came from this group.