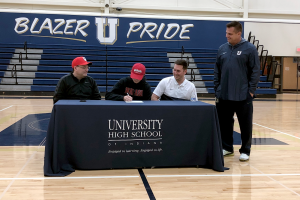 On Monday, December 16, one Trailblazer athlete signed a National Letter of Intent to play NCAA Division III men’s baseball at Wabash College in Crawfordsville, IN.

Senior Alexander Washlock, a boys baseball standout at University High School and member of the Class of 2020, will play the sport at Wabash next year. He is the second student in as many years to commit to athletics at Wabash College, as 2019 graduate Neil Pettinga is a freshman lacrosse player there this year.

Washlock signed the letter in front of his parents, coaches, teammates, and peers at University High School in a special ceremony after school.

“He’s turned into an absolutely outstanding player,” said University High School baseball coach Chris Estep during the signing ceremony. “He led us in hitting last year, which helped lead us to the state championship.”